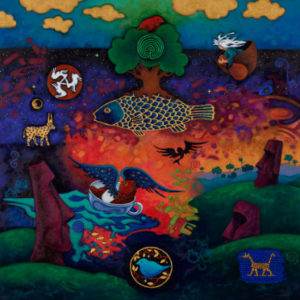 Acrylic on canvas, gallery wrap with painted edges, 36″ x 36″
The large fish with a tree sprouting from it echoes the coat of arms of the city of Glasgow, Scotland. Removing the figures from their heraldic context, they are adorned with a labyrinth and mythologically positioned in the sky. The ubiquitous fish theme presents through a winged fish emerging from a tea cup floating on the sea. The addition of peacock feathers offers beauty and rich symbolism. In alchemy, the peacock refers to the rainbow stage – after the black and before the white – the multi-colored second step in the process of transformation. The Moai (the giant stone statues found on Easter Island in the South Pacific) mysteriously observe the scene objectively.

The Moai, like the elaborate carved wooden images from the Hawaiian Islands or the stone tiki of the Marquesas, while much bigger, represented the same deified ancestors so important in Polynesian religion and cosmology. That the Moai were religious images explains why the vast majority face inland, watching over their descendants day after day. …the islanders carved something well over 950 statues… more than 500 were transported considerable distances…
Terry Hunt and Carl Lipo,‘The Statues that Walked’

Interestingly, these authors contend that the inhabitants of Rapa Nui were not, as is commonly believed, the poster children for ecocide, but were changed irrevocably by contact with European culture, and decimated by the introduction of foreign diseases. The original palm forest was devoured by rats brought to the island by the Polynesians themselves, all unknowingly, on their boats. The figure of Mehet-Weret based on one of the funerary beds of Tutankhamen enters the scene from stage right.

An ancient cow goddess whose name means ‘Great Flood’, Mehet-Weret was said to have risen from the waters of creation and to have given birth to the sun god Re whom she placed, as a solar disk, between her horns. This image of the cow who raises the sun disk into the sky also equates… [her] …with the heavens, and she is clearly viewed as a sky goddess in the Pyramid Texts, where the goddess represents the waterway of the sky which was sailed upon by the sun god and the king… [she is a] …conceptualization of primeval creation.
R.H. Wilkinson, ‘The Complete Gods and Goddesses of Ancient Egypt’

Mushhushshu – a golden hybrid creature depicted on the Ishtar Gate of Babylonia combines the head of a horned viper, the forelegs of a lion, the hind legs of a bird of prey, and a scorpions’ tail – serves as an informal foil to the Egyptian Mehet-Weret.

Nebuchadnezzar, King of Babylon from 605 B.C.E to 562 B.C.E, was a tireless builder who made Babylon the most splendid city of its’ time. Of eight gateways in the massive walls, each sacred to a different god, the most imposing was the huge Ishtar Gate built in honor of the Babylonian goddess of love and battle, and rising 50 feet above a sacred processional way into Babylon. This reconstruction of the gate now stands in the Pergamon Museum in Berlin. The walls of the flanking towers were clad from top to bottom in glazed blue bricks, which were decorated with yellow and white reliefs of dragons, symbols of the Babylonians chief god Marduk, and bulls, symbols of the lightning god Adad. Baked bricks cemented with bitumen formed a solid core for the wall, and the foundations went down as deep as the wall was high. Overlooking the Ishtar Gate rose the famous Hanging Gardens…
Reader’s Digest, ‘The Last Two Million Years’

The ancient archetype of the spiral triple hare motif spans many centuries and cultures. The triple hares often accompany depictions of the green man in the medieval churches of Europe. The Three Hares Project, a non-profit organization that strives to research and record all known occurrences of the three hares motif states that …the earliest known examples … are to be found painted on ceilings of Buddhist cave temples at Mogao, near Dunhuang, China. They are dated from 581 through 907 CE. The design is found on an Iranian coin dating from 1281/1282 and on a bell in the Cistercian Abbey of Klosler Haima, Germany, dating from 1224 CE. The bird at the top of the tree is, indeed, included in the Glasgow coat of arms. A second bird enjoys protection below the scene. Birds represent freedom, the soul, and the essence of life. In the spirit of it’s namesake Fish, Fish 2 speaks about transformation, regeneration, and renewal by juxtaposing multicultural mythological figures, symbols, and overlapping horizons.