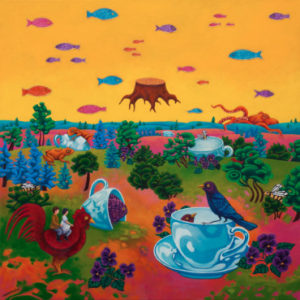 Acrylic on Gallery Wrap Canvas, 30″ x 30″
Although fish are a dominant but benevolent theme, each painting in the Fish Series contains images and representations of my current attitudes, frustrations, and concerns. This concept began with the idea of the tree stump floating in the air. A natural progression from Fish 2 in which a robust oak tree grows from the top of a giant fish (based on the emblem representing the city of Glasgow) and floats in the air. Now, the tree has developed into a literal symbol of deforestation (the giving tree, denuded, with nothing left to give), isolated in the sky. (Shout-out to Mark Ryden and his painting The Apology, for additional inspiration in pursuing this image.) The majority of the painting is bustling and full of life. The primary color here is yellow (Fish was red, Fish 2 blue); and replacing vertical stations of circular symbolic imagery with randomness and opulence. Multi-colored fish outlined in gold are peppered throughout the sky. Giant tea cups are strewn across the landscape; some are half-embedded in the ground like ancient artifacts. The symbolism of the cup as an inexhaustible container of life and sustenance (like the Grail, or Dagda’s Cauldron in Irish lore) is accentuated and realized with an abundance of animals, filling, perched-on, and draped-over their rims. The children ride a rooster is a theme from Russian folklore. Violets are common and wild and refer to the legend of Attis and Cybele. Attis, driven mad by the goddess Cybele, kills himself beneath a pine tree. Violets spring up where his blood falls. He is later resurrected and becomes the embodiment of spring and new life.The bees signify their traditional role of fertility as well as their evolved role as environmental gauge. A new fascination with octopi inspired a giant sprawled over a distant hill in a kaiju-like fashion. The central figure, in the midst of all this activity, is one of isolation and untimely endings. This stump is out of place like a Marcel Duchamp plumbing fixture in a gallery. Set in the sky… Not only as an object of scrutiny, but in an ascension to safety. Not to the heavens but to the skies of Earth.