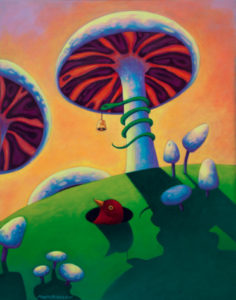 Acrylic on board, 15″ x 19 1/2″
The germination of this painting occurred during a thought exercise in which I meditate on a known image and contemplate the options to convey a similar concept or portray the image from a different perspective. The image of Jacob Bryants 1774 rendition of the ‘Orphic Egg’ was the challenge. This iconic drawing of a snake coiled around the entirety of an upright egg has influenced and informed many modern illustrations. My first exposure was at the bottom of The Lovers card in Aleister Crowley’s Tarot Deck, The Book of Thoth. Crowley describes …the winged Orphic Egg is the result of the Marriage, and the glyph of the offspring of all male/female coupling. Symboldictionary.net describes the Orphic Egg (aka World Egg, Cosmic Egg ) as …usually represented as an egg surrounded by a coiled serpent. The egg symbolizes the belief in the Greek Orphic religion that the Universe originated from within a silver egg. Michell Snyder writing for Examiner.com states, …in the esoteric tradition the Orphic Egg represents the soul of the philosopher, the serpent symbolizing the Mysteries. The egg signifies the Cosmos as encircled by the fiery creative spirit… In many cultures the egg is a symbol for the Earth, and snakes are associated with the moon. So, I set about imagining a snake entwined around something besides an egg. The easy answer was a tree but a giant mushroom is far more interesting… and I’ll add a bell in it’s mouth to say, “Wake up! I’m here!”

The bird emerging from the earth was influenced by a painting in which song birds were swimming in a lake. Many thin layers of acrylic glaze consisting of small amounts of heavy-body acrylic diluted with gloss glazing medium to achieve these bright colors and the dynamic shading. I readjusted the color of the sky several times.