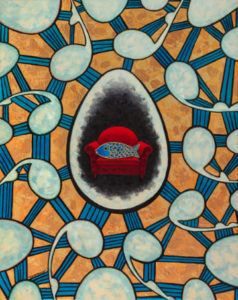 Acrylic on Gallery Wrap Canvas, 24″ x 30″
The abstract curved pattern, which frames the center egg, is based on a Maltese dish from Hal Saflieni hypogeum and has been dated to 3000 B.C.E. Ceramic figurines found at the same site provided the impetus for the concept of the central figure in the drawing – the fish on the couch.

…figurines of ‘sleeping ladies’ lying stretched out on low couches… Why is she sleeping in the tomb? One explanation is that this represents a rite of initiation or incubation (could be votive offering–could represent healing practice). To sleep within the Goddess’s womb was to die and come to life anew… in another representation, a fish lies on a couch… Lying on couches, both fish and women could have symbolized incubation, regeneration, or both.
Marija Gimbutas, ‘Civilizations of the Goddess’

The first levels of the hypogeum at Hal Saflieni on eastern Malta were begun in 3600 B.C.E., and finished in 2500 B.C.E. The eight rooms of the first level are roughly egg shaped or womb shaped chambers. The original dish is decorated on the underside with the abstract egg design, while on the inside… nine bulls with huge horns are incised and white encrusted… the combination of bulls and horns with eggs is a typical Old European symbol of regeneration which lasted for millennia. The ancient egg design and pattern combine with the modern, surreal concept of a fish on a couch with fascinating results. Once again, I explore the plush furniture theme in the egg (Fish on Couch) within this painting. A vibrant, blue, and gold-encrusted fish sparkles under several shades of textured metallic gold while resting on a clean, plush loveseat.