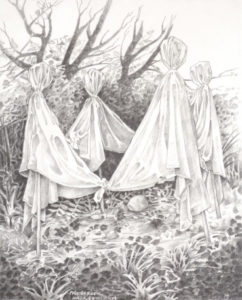 Graphite pencil on paper, 16″ x 20″
Every October, a “ghost ring” appeared in the front yard of one of the houses on executive row in Yosemite. Comprised of sheets, stuffing, and poles, the five simple figures danced in the wind and were captivating. Years later, a similar ring appeared in my own yard. I was limited to four poles but they danced with abandon nonetheless.